I have returned from my holiday hiatus to present to you a pleasant little early Renaissance dish from Germany. This may be, quite possibly, my simplest recipe yet. Only three ingredients are required: almond meal, sugar and cream.

This recipe is from the first known cookbook written by a woman! The 16th-century manuscript was published as Das Kochbuch der Sabina Welserin by Hugo Stopp in 1980.

Not much is known about Sabina Welserin, but it is likely she is one of two Sabinas from the Welser banking family of Augsburg. (McNealy)

In case you’re curious, the “in” of “Welserin” is the feminized version of Welser. This was typical of women’s surnames in the 15th and 16th centuries, notably in the High German dialect. Women were rarely referred to by their surnames in writing unless they were widows or the heads of their households. For this reason, I suspect the Sabina Welser who authored this cookbook was the Sabina Welser who was born in 1515 and died in 1576. She was divorced and therefore the head of her household, so she may have used her father’s (Anton Welser) surname when she wrote this book in 1553 at the age of 38.

In the name of the Holy
Trinity I, Sabina Welserin,
begin this cookbook.
God grant me His holy
grace and wisdom
and understanding and judgment
with which I
through His Holy will live
here in this time and
with Him forever. Amen. anno 1553

This “pudding” is intended to be quite thick, as the original text states that “not too much” cream should be used. I am not sure that pudding is the best term for this, since it is more like a sweet and stiff polenta made with almond meal. Or perhaps more accurately, a less firm marzipan. It is worth noting that the modern German word for almond butter is mandelmus. It can also be translated literally to mean “almond puree.” Puree or even paste might make bit more sense, but for now we’ll just stick with pudding.

The type of cream was not specified, so a cook could safely use cream from cow’s milk or almonds. Almond cream was used in other period recipes and it was common to use dairy-free ingredients during Lent or other fast days in which all land-animal products were off-limits. 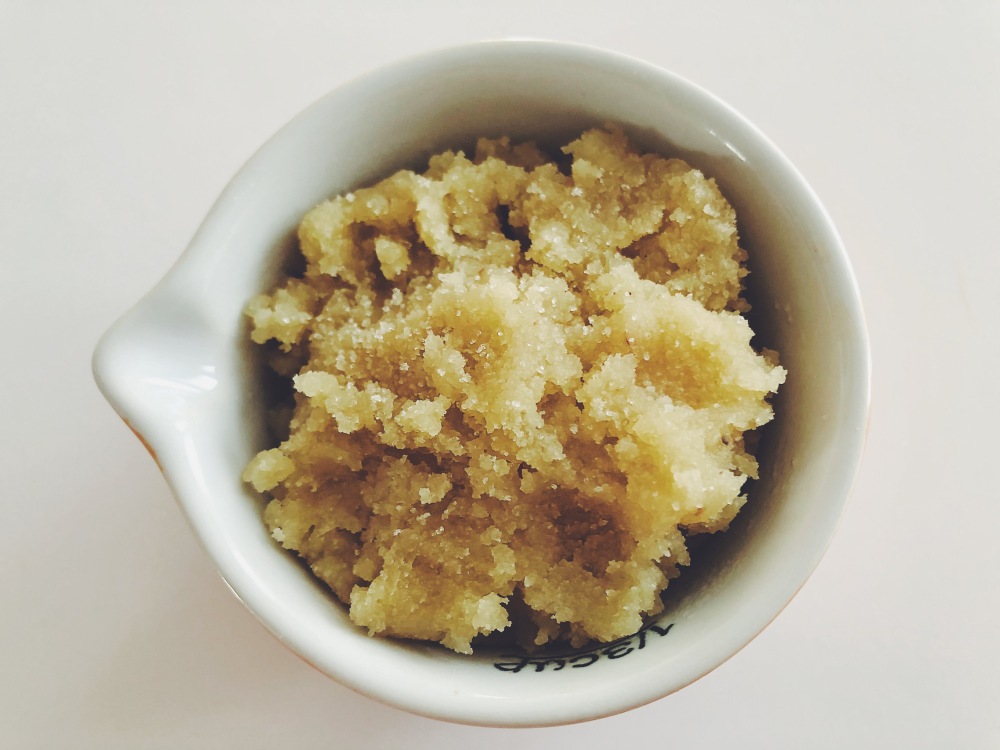 49 To make a good almond pudding

Then pound the almonds well, put them in a bowl and pour good cream therein, not too much. Whip the almond paste very well, so that it becomes smooth, put sugar therein and allow it to cook for a short while. When you serve it sprinkle sugar on top, then it is a lordly pudding. Take three fourths of a pound for a dish. Translation by Valoise Armstrong, 1998.

Pour almond flour/meal into a saucepan and add cream. Stir and blend well with a spoon until it makes a smooth dough-like paste. Stir and fold in the sugar. Heat over medium-heat 5-10 minutes, stirring until heated through. Split the dough into three or four parts and serve in small dishes. Garnish with sugar.

I played around with this recipe quite a bit to get the best texture and balance of sweetness. Too much liquid just doesn’t feel true to the source, though you could certainly add a touch more if you want your paste to be less stiff.  It should be about the thickness of a soft cookie dough, in my opinion. I feel like 1/4-1/3 cup is an adequate serving, so my measurements above should serve 3-4 people.

I’ve had this completed recipe sitting in my queue for a while (I have quite the backlog), but I recently discovered another cooking method that I thought I’d try for experimental purposes.  It’s important to always give credit where credit is due so the following adaptation was inspired by the work of Mistress Leoba/Christine Lawry of Leoba’s Historical Kitchen.

Instead of cooking on the stovetop, fill muffin tins with the paste (no more than halfway) and bake at 250 degrees for 15 minutes. You could also use a mini muffin tin. Let cool, flip over and serve garnished with sugar. 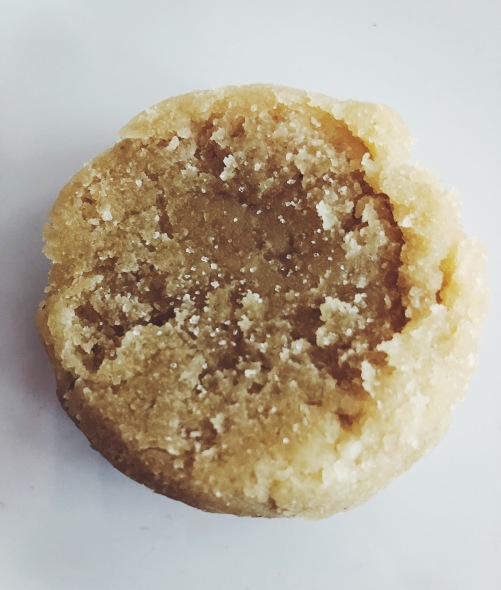 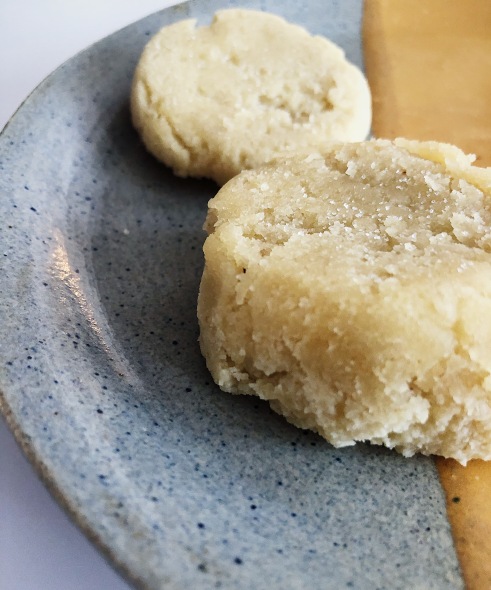 It’s impossible to know what Sabina Welserin meant by “cook a short while,” so that is easily up to interpretation. But because Sabina uses the word “sieden” here, which means “to boil” and “to cook,” instead of “bachen” which is used elsewhere in the book, I feel like she would have specifically instructed us to bake this pudding if she meant us to. Still, I think the baking method is worth trying.

The baked version was a fun – albeit less authentic- way to serve this pudding. In order for it to hold its shape and become firm enough to remove from the tin, it must be baked just long enough for the exterior to be slightly crispy. If you do try it, make sure you grease the pan with oil. In my experience, silicone molds and muffin paper do not work very well.

Since I used my measurements for both cooking methods the flavor is the same either way.  But for texture and authenticity reasons, I definitely prefer the stovetop method.

This is a strange little confection but I like it. Start to finish, it takes about 10 minutes and it’s very easy to whip up half a recipe for myself if I’m in the mood for a not-overly sweet almond treat. 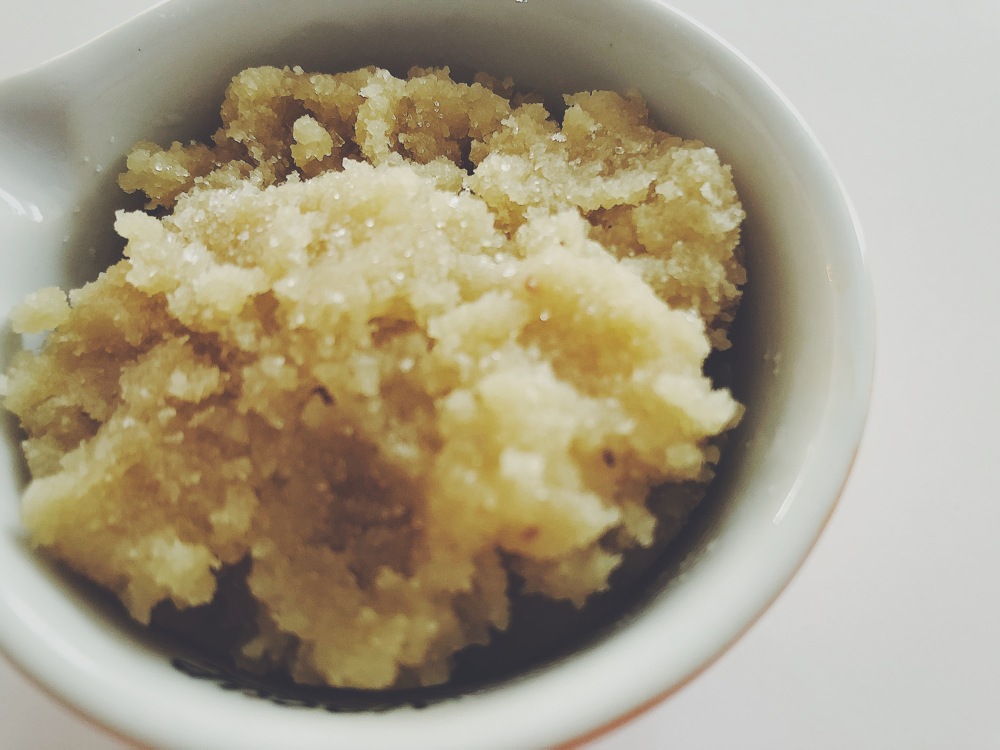 I tried both heavy cream and almond milk and I was surprised to find that I liked the almond milk better. The heavy cream seemed a bit thicker and creamier, but I enjoyed the added boost of almond flavor from the milk.

As a side note, I am not a fan of marzipan but I do like whatever this is. So while it is tempting to compare this pudding directly to marzipan, it just isn’t the same thing. If anything, it’s more like the coarse, nutty almond paste that serves as the base for marzipan or used as a filling for other things. In fact, I’ll probably repurpose this recipe in the future and use it as almond paste!