While preparing the menu for my upcoming Easter-themed medieval cookery class, I came across a great dish that fits all of the criteria: simple, relatively fast and uses hard-cooked eggs.

Easter follows the Catholic tradition of observing Lent, a six-week period of religious devotion and observance that includes fasting and abstinence from certain types of food. In medieval Europe roughly half of the year fell on a fast or “fish” day. The longest period of fasting or abstinence was Lent, which meant forty days without any meat or meat product (with the exception of fish), dairy and eggs. By the end of Lent everyone was so tired of fish that it’s no wonder Easter feasts featured all those delicious spring foods that had been forbidden! And since chickens don’t stop laying to observe Lent, it was common practice to boil the eggs to preserve them, or at least to lengthen their shelf-life somewhat.

Capouns in Councy (Capons in gravy) is a dish of capon (fattened rooster) pieces served with spiced gravy and garnished with a boiled egg yolk. This recipe comes from an English cookery manuscript called the Forme of Curye (1390) and would have been an excellent dish to serve around Easter.

Capouns in councy. Take capouns & rost hem ryght hote that they be not half ynowgh and hewe hem to gobettes & cast hem in a pot, do therto clene broth, seeth hem that they be tendur, tak brede & the self broth and drawe hit up y ferer, tak strong poudour & safroun & salt & cast ther to, tak ayroun & seeth hem harde, tak out the yolkes and hewe the white, tak the pot fro the fyre & cast the white therinne, messe the disches therwith & lay the yolkes above hole and flourer hit with clowes, & serve hit forth.

Capons in gravy. Take capons and roast them hot that they be not half enough (until they are half-done) and cut them to pieces and put them in a pot, add clean broth, simmer them until they are tender, take bread and the same broth and combine, take strong powder and saffron and salt and add, take eggs and boil them hard, take out the yolks and cut the white, take the pot from the fire and add the whites, prepare the dishes with it and crown with yolks and flour it with cloves and serve it forth.

There is another very similar recipe from A Noble Boke off Cookry (1468) called capons in couns. The only differences are the capon is poached rather than roasted-then-boiled and there is no mention of the strong powder.  The gravy is just seasoned with salt and pepper.

To mak capons in couns tak a capon and sethe it and hew it then grind pepper and bred and temper it with the capon then tak the whit of egg herd sodene and hew them small and boile the capons and colour it with saffron and lay yolks of eggs in the disshe hole and serue it.

The redaction is adapted from the second edition of The Medieval Cookbook by Maggie Black (2012) under the title “Capon or chicken crowned with eggs.” I have added a few notes throughout and provided my own clarification and interpretation of some of Maggie’s basic directions.

Pre-heat the oven to 220 C/425F. Grease the bird with butter or fat and roast for 15-20 minutes or until browned. Time may have to be adjusted depending on whether you use a whole chicken or the boneless breasts. The chicken doesn’t have to be fully cooked in this step, just browned. Cut the chicken into bite-sized pieces. You can remove the skin or keep it, though I opted to go skinless.

Put the pieces of chicken in a pot with the stock. Cover and cook gently for 25 minutes or until the meat is cooked. Maggie suggests transferring 3-4 tablespoons of the stock to a bowl to steep the saffron in order to activate the yellow/gold color. You can do that or simply add the saffron to the pot. The saffron is more for adding color than flavor so you may choose to not add it to the dish at all.

Strain the stock and put the chicken aside where it will remain warm. Add the saffron-infused stock if you haven’t already. Mix the breadcrumbs and spices together then stir it into the stock. Simmer for a few minutes until the stock thickens into a gravy/sauce.

A couple additional notes on this step:

Separate the egg whites and yolks without breaking the yolks. Cut up the whites and either add them directly to the gravy pot or garnish individual portions. Finally, top each serving with its own egg yolk. You can sprinkle on ground cloves as well, but I found the flavor to be a bit much for my taste. 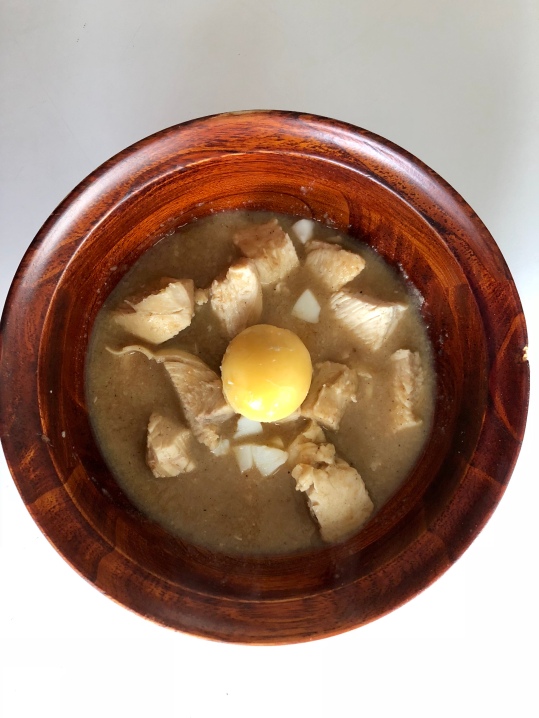 Capons/chicken in gravy is an interesting dish. I initially couldn’t decide whether or not I liked it because my brain was expecting a much more savory gravy with my chicken. However, when I got over my surprise at the sweetness of the spices and knew what to expect with each bite I did genuinely enjoy it.

It was very common for medieval chefs to combine sweet and savory together in the same dish, so this is certainly not unfamiliar territory! Still, if you are like me and accustomed to a very salty gravy, Capouns in councy might be a bit of an acquired taste. Don’t let this deter you! This dish is very easy to make and you can personalize the flavors without compromising its historical accuracy. Give it a shot and tell me what you think!