As a young child one of my dreams was to go to East Africa. Of course like every little girl I wanted to see a wild zebra, but as I got older what I really wanted was to quietly live like a local and not be limited to stereotypical safaris and tourist traps. In 2009 this dream became a reality when I had the opportunity to work in rural Kenya, far removed from the tourist agenda.

I quickly discovered that Kenya is even more beautiful and varied than I had imagined it would be. I also learned that Kenyans are passionate, warm, exceptionally friendly and they take great pride in their families and communities. I felt so welcome in every home and school I had the pleasure of visiting. To this day I feel deeply honored to have been invited to dine with many locals who treated me as a friend and not just a confused mzungu! To be with Kenyans is to be in good company.

Kenya is a country with enormous diversity, from the landscapes and wildlife to the languages and people. There are 42 official indigenous ethnic groups, 44 if you count the large non-indigenous native population of Arabs (established by the 15th century along the coast) and Asians (Indians who settled in the 19th century). Agriculture varies too, since Kenya is home to deserts, mountains, forests, swamps, savannah and the Maasai Mara (‘the Mara”), one of the most popular safari game parks in Africa. Because Kenya has such a wide variety of cultures, religious traditions and food economies there is no single cuisine that defines the country. Perhaps with a major exception: ugali.

Despite the variety of regional cuisines, Kenya’s staple foods are cereals (maize, millet, sorghum), meats (beef, goat, chicken) and vegetables. There are only a few specific dishes that can be found across nearly all ethnic lines, such as ugali, sukuma wiki and nyama choma. 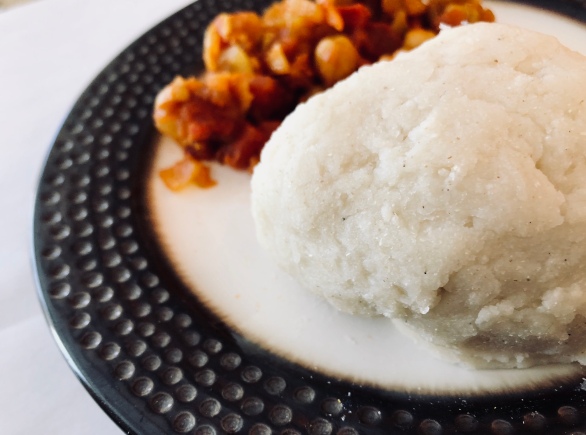 Ugali is considered a universal Kenyan dish and it varies only slightly depending on where you are. It is like polenta or Romanian mamaliga, but is made with fine white maize meal flour and cooked to a thick consistency similar to play-dough. Ugali is typically unsalted or un-flavored in any way.

Maize was introduced to Kenya by the Portuguese traders and colonists beginning in the 16th century and it quickly became the grain of choice. In the East, ugali is usually made with white cornmeal, but in the West it is made with millet as well. On the coast you might eat your ugali with some fish or curry, but inland you might use your ugali to scoop up some beef stew like karanga. Regardless of how it is served, you should eat ugali with your right hand.

This recipe was given to me by my friends Patrick and Josephine, whose home I stayed in for much of my time in Kenya. They currently run a nonprofit called Mission with a Vision and are devoted to helping young people gain an education and vocational training. There are so many ways they are helping Kenyan communities and I hope you will take a few minutes to read about their various projects and perhaps even consider making a donation! 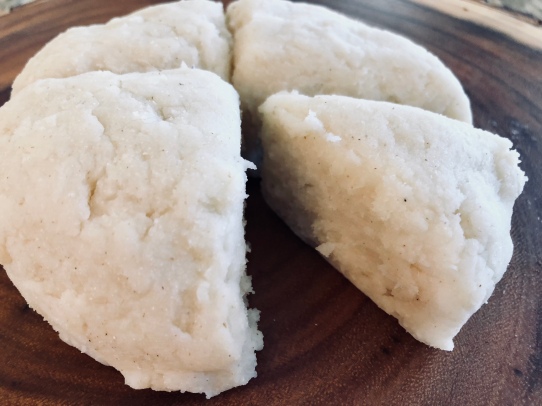 Without fail, every dinner I was served in Kenya, whether in a home, at a school or elsewhere included ugali. I was first introduced to this dish at Patrick’s, and it was served as a white mound in a large shared bowl in the center of the table. It looked so much like the pile of mashed potatoes my mom would make that I dug right in and ate it plain, mentally prepared for a flavorful and salty side dish. This is NOT how you should introduce yourself to ugali! It really is delicious, but it is not meant to be eaten on its own.

An Important Note about Maize Flour and Cornmeal:

Maize meal and cornmeal are the same thing, but they go by different names depending on where you live. The difference between meals and flours can be confusing. Maize/corn flour is generally going to be finer than meal, and “maize meal flour” is what is often used in Kenya. Corn meals can come in different grinds (fine, medium or coarse), but I’ve found that a plain white cornmeal is actually quite fine like a flour and considerably less coarse than typical yellow cornmeal. Many recipes for ugali simply call for “white cornmeal,” but you should go for the fine grind or the actual flour if you have the option. The Stone ground white cornmeal I used is a good and accessible substitute for white maize meal flour and resulted in the nice dense, smooth consistency that I was going for.

As for the color, yellow and white cornmeal are generally interchangeable in a pinch, just know that the yellow cornmeal is too coarse and will not give you the authentic traditional ugali look, texture and flavor. If you cannot find white cornmeal and must use yellow, look for the Masa corn flour used in Latin American cooking.

Pair with greens (such as sukuma wiki), roasted beef or lamb, fish, or stew. 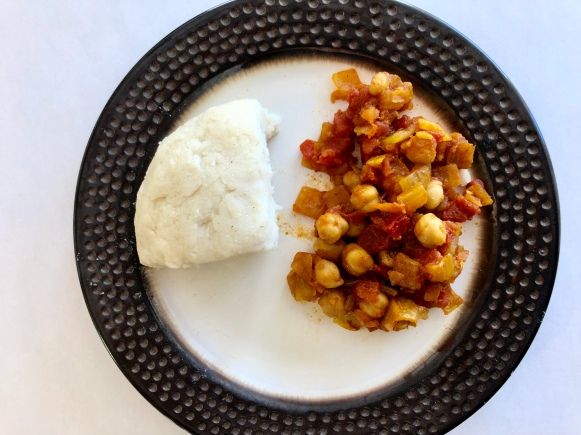 Ideally, your ugali will be thick enough to use it to pick up your meat.  Pinch off a portion, roll it in your hand, make a well with your thumb and scoop up your curry, greens or stew. If you aren’t used to eating with your hands you could use a fork, but just don’t let a Kenyan see you do that!

I most recently ate mine with a delicious Indian-style chickpea curry. Eat it with whatever accompanying dish you want, but if you experiment with some other authentic Kenyan recipes you’ll be glad you did!