Two of my all-time favorite things are history and food so I thought, why not put them together? Perhaps the easiest way to experience and connect with the past is to eat authentic ancient food. Since such dishes can be hard to come by, our best option is to make them at home!

During the Elizabethan era (1558-1603), England saw a significant increase in the availability of spices from around the world. British colonialism and exploration during this era not only introduced new spices and foods to royalty and members of the court, but also made certain ingredients (like fruits and sugar) more accessible to the lower classes.

Now that wealthier kitchens had access to an array of new spices and fancy ingredients, more varieties of foods and desserts began to emerge. One of these foods was a bagel/pretzel/biscuit hybrid called a jumbal (or jumble).

Some fun facts before we get baking:

“Take twenty Egges and put them into a pot both the yolkes and the white, beat them wel, then take a pound of beaten sugar and put to them, and stirre them wel together, then put to it a quarter of a peck of flower, and make a hard paste thereof, and then with anniseeds moulde it well, and make it in little rowles beeing long, and tye them in knots, and wet the ends in Rosewater; then put them into a pan of seething water, but even in one waum, then take them out with a Skimmer and lay them in a cloth to drie, this being don lay them in a tart panne, the bottome beeing oyled, then put them into a temperat Oven for one howre, turning them often in the Oven.”

*This jumbal recipe is brought to you by the University of Reading and Historic Royal Palaces. Without their food expertise I would have never known where to start with the measurements, or that twenty eggs in 1596 equates to 10 medium modern eggs!

Apparently the original recipe makes a ton of jumbals so the experts suggested using the following measurements:

Step ONE: The Dough

“…beat [the eggs] well. Then take a pound of beaten sugar and put to them, and stir them well together”

Beat the eggs well. Add the sugar and beat again. Or stir, but beating with a whisk worked just fine for me.

“Then put to it a quarter of a peck of flour and make a hard paste thereof.”

I have no idea what a quarter of a peck of flour is. So I just added flour until the dough was firm, but easily handled without being too sticky. Like pasta dough. I think we ended up with around 2 cups.

I then rolled the dough around in caraway seeds until they were pretty evenly distributed. 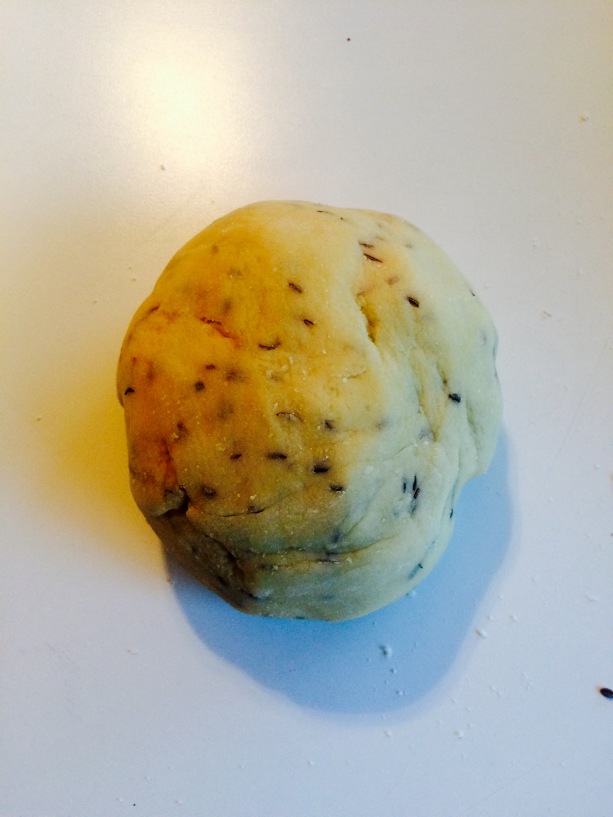 Jumbals were often twisted into “knots” or pretzel shapes to make them easier to eat.

“…mould it well and make it in little rolls, being long. Tie them in knots, and wet the ends with rosewater.”

I cut the dough into smaller pieces and rolled them out into long rolls, probably around 1/2″ thick. Next time I would probably make them a bit thicker, but not by much. I cut the rolls into shorter pieces and tied them into pretzel shapes. I did not have rosewater, but I’m interested to see what difference that would make, if any.

The dough can be tied into a variety of cool shapes so have fun with it! I suggest making all of the jumbles roughly the same size so they cook evenly. The simple pretzel shape and braided rings turned out the best and were by far the easiest to eat. It will make sense why in the next step.

“Then put them in a pan of seething water, but even in one waum. Then take them out with a skimmer and lay them in a cloth to dry.”

Once I got a pot of water to a rolling boil I dropped each jumbal in one at a time. When it rises to the top it’s ready to be fished out of the water and gently placed on a paper towel to dry. I only had two or three lose their shape or break, and none of those were knotted (so pinwheels are not recommended). It doesn’t take long at all for them to rise to the top.

“This being done, lay them in a tart pan, the bottom being oiled.”

I greased a cookie sheet and placed all of the jumbals in one layer. There is no leavening agent in these so don’t worry about them rising and getting stuck together.

“Then put them in a temperate oven for one howre, turning them often in the oven.”

“Temperate” seems a bit vague to me, so I set my oven at 250 degrees Fahrenheit (120-ish degrees Celsius) and hoped for the best.  I turned all of the biscuits every 5 minutes for about 50 minutes, until they had become only slightly golden brown.

My jumbals seem to have turned out pretty much the way they were supposed to. They are NOT soft but they shouldn’t be so rock hard that you can’t break or chew them. For this reason I would suggest twisting them into a simple knot or braiding them all the way around like a wreath, since the braids seem to be easiest to bite into. Dunking also softens them up, so a nice cup of English tea or coffee would probably do the trick.

The flavor is very nice, much like a sugary bagel with caraway seeds. Cinnamon is not authentic for this particular recipe but probably would be very tasty. Some people sprinkle powdered sugar over them as well. These were, after all, a sweet treat offered at the dessert table during banquets and feasts.

All things considered I genuinely enjoyed these jumbals and I feel like they were historically accurate. I believe mine were probably a bit smaller than the ideal but were otherwise true to the original recipe. Next time I will try this same recipe with the method used here just to see how they compare, even though it isn’t exactly as written back in 1596.

If you want to try another jumble recipe check out the links below:

Jumbles: Cookies that Travelled Across an Ocean and Through Time