During the medieval era it was common to forage for edible mushrooms, though there is a surprising lack of actual mushroom recipes in surviving manuscripts. Perhaps this is due to upper-class households turning their noses up at any fungus other than expensive truffles, or maybe it’s because physicians assigned mushrooms “melancholic” properties, which were not to be eaten by the elderly. Maybe, as with bread, those with the skill to do so saw no point in actually writing the recipes down. We will likely never know.

There are two French mushroom recipes that I know of and both are pies. These are not the only recipes out there; Germans used mushrooms in purees, Italians in tarts and an English recipe – one of my favorites- is a soup that I will release at a later date. But for now, we focus on French, specifically the one from Le Menagier de Paris.

Le Menagier de Paris, also known as The Goodman of Paris, was written 1392-1394 by a wealthy older merchant for his new young wife. The book covers all kinds of topics about managing a household and includes around 75 pages of recipes. I wrote a little more about the book in my post about Lombard Chicken Pasties. 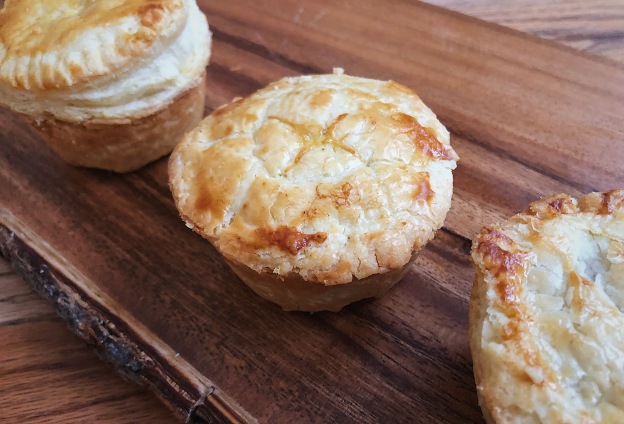 MUSHROOMS of one night are the best, and are small and red inside, closed above: and they should be peeled, then wash in hot water and parboil; if you wish to put them in pastry, add oil, cheese and powdered spices. – Translation by Janet Hinson.

This recipe is included in the original text with a small number of others under the heading Pastés. The French word pastés means pie, pastry and pasty. Since I chose to make small savory hand-pies instead of a full-sized pie I’m calling these pasties.

Before we get into the step-by-step directions, I have a few notes about the ingredients.

The Goodman of Paris is pretty vague about the spices, which isn’t all that surprising. It was common for cooks to use spice blends either favoring “strong” spices (powder forte) or “sweet” spices (powder douce). There is a recipe for fine powdered spices elsewhere in this book but there is no indication it was meant to be used for this recipe and I think it’s too sweet anyway. So instead, I created my own powder fort/poudre forte blend of period spices that would favor ginger (typical for a powder fort) and compliment mushrooms.

You can use shortcrust or puff pastry dough. I tried both shortcrust and puff pastry (lids only) and I suggest using just a simple shortcrust, preferably homemade so it is of good quality and not too sweet. If you’d like, you could try one of the pie pastry recipes found in my recipe for Crispels.

Again, Goodman doesn’t specify which kind of cheese to use in this recipe. But I did get some clues from elsewhere in his book, particularly this “poem:”

Not white like Helen,
Not weeping like Magdalene,
Not Argus, but completely blind,
And as heavy as an ox:
It is firm against the thumb,
And its coat is fine.
Without eyes, without weeping, not white,
Handsome, firm, well-weighted.

So a good cheese is not super white, not runny, no eyes (no holes), is heavy and firm. There’s also a clue about Lazarus that some think is alluding to leprosy, so maybe a good cheese also has a bumpy rind.

Using these clues and the knowledge of cheese types available in the 14th century, I decided Comté, Beaufort and Gruyere are my best options. He is likely talking more about quality of cheese than the specific type, but I avoided Emmental anyway due to the holes. Brie is used quite a bit in medieval cookery, but I think it might be too soft for this particular recipe.

Since I don’t have easy access to Comté and Beaufort I just went with Gruyere. Parmesan could also work, though, but I don’t know if it was widely used in France in the 14th-century. It was certainly common there by the 16th, possibly earlier.  In the end the cheese you use isn’t a matter of life or death, so choose according to your personal preference.

Step ONE: The Mushrooms

MUSHROOMS of one night are the best, and are small and red inside, closed above: and they should be peeled, then wash in hot water and parboil

We want small, young mushrooms that are clean and parboiled. Don’t bother with the peeling -it’s not necessary unless you picked the mushrooms yourself- but you may give them a rinse if you really want to.

Bring a pot of salted water to a boil and drop the mushrooms in to cook for about 2 minutes. This will not only clean them thoroughly but will also help them keep their texture when baking and prevent the pastry from getting soggy. Drain and pat dry then rough chop. Set aside.

…if you wish to put them in pastry, add oil, cheese and powdered spices

Blend spices together then combine with mushrooms, oil and about 1 cup of grated cheese. For a cheesier filling, add more cheese. Set additional cheese aside for later.

Fill each cup with the filling and top with additional cheese. Lightly beat an egg and brush along the edge of the pastry to seal the lid on. Cover with lids, using a fork to crimp the sides or simply press them together. Use a knife to cut two small slices crosswise in the center. Brush entire lid with the egg wash.

Bake in a 350/180 oven for 15-20 minutes or until the crust is a golden brown. Remove from the oven and let cool until the pasties can be removed easily from the tin. Eat warm or cold. 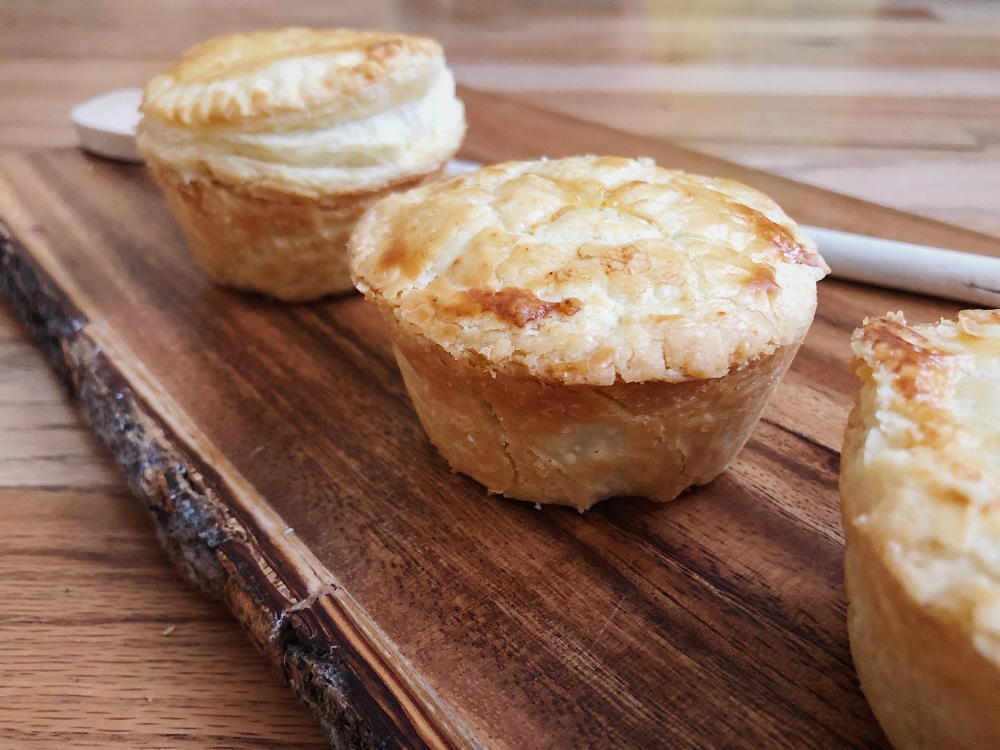 I am not in love with these pasties, but I do like the filling. It’s the pastry the throws me off a little, to be honest. During the Middle Ages it was quite common for savory dishes to also be sweet (see Flampoyntes), so these pasties will very likely have a different sort of flavor than you’re used to.

Next time I make this I’ll double the filling ingredients and try it as a full-sized pie. I might prefer my pastry/filling ratio to favor the mushrooms and cheese. Savory over sweet. The filling may also need to be a bit stronger so I may also up the ginger to a 1/2 teaspoon.

Overall, it’s a really fun little snack that would make a great addition to any rustic medieval-inspired meal. 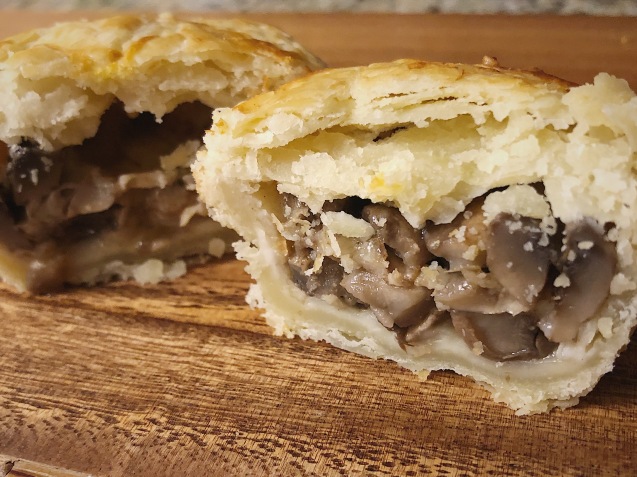